Today, the airline joins Alaska Airlines and American Airlines by becoming the third U.S. carrier to announce its timetable for an all-out ban on emotional support animals in its cabins. Service dogs – dogs trained to do specific tasks for an individual with a disability — will still be allowed.

One piece of good news if you were hoping to jetset one last time with your emotional support dog: there’s still time!  Three days and a few hours to be exact before the clock strikes midnight on January 11  during which passengers can still make a reservation to fly with an emotional support animal (dogs only, now). Delta says it will honor any reservations made with ESA’s prior to January 11. (The other two airlines have imposed a Feb. 1 cutoff date for ESA reservations.) 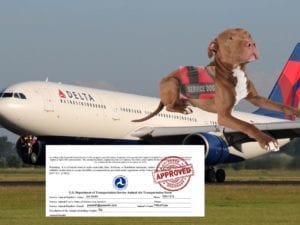 Delta — the airline which led the move to ban “pit-bull-type dogs” following a series of violent incidents inflight involving pit-bulls traveling as emotional support animals — also becomes the first major U.S. carrier to announce the removal of its pit-bull ban today. [*Update: One day following the publication of this report, United Airlines spokesman Charles Hobart told TCR the airline would no longer restrict “any breed” that meets its service animal requirements.]

“Delta will lift its ban on pit-bull type dogs that meet documentation requirements for trained service animals,” the announcement says. The announcement adds, however, that pit-bulls “will not be allowed to travel as emotional support animals for those customers ticketed and confirmed before Jan. 11.”

Delta’s pitbull policy change is not a surprise. Almost exactly one year ago, Delta told TCR that if DOT implemented the proposed rule changes (which it did last month), the airline would lift its ban.

Delta’s announcement follows the announcement of major changes to the Air Carrier Access Act by the U.S. Department of Transportation (DOT) in early December, notably the part of the law that required airlines to accommodate emotional support animals accompanying a passenger who submitted the required documents.

Excerpt from today’s announcement from Delta:

DOT Service Animal Documentation: Will passengers continue to misrepresent their animals in the new era?

[See below to view the forms in full.]

As far as “documentation requirements for trained service animals,” Delta, American, and Alaska all say that customers will now be required to submit DOT documentation at least 48 hours in advance when traveling with a service dog.

The DOT’s final rule gives the airlines much more discretion, including the option of requiring documentation from a physician. It’s not clear if the airlines had the option of requiring its own set of forms, simply requiring a physician’s letter, or if more DOT documentation requirements will follow as the new system rolls out. When asked for detail about the documentation, a DOT spokesperson would only confirm that airlines can require passengers traveling with service animals to complete two DOT forms: The first form requires the passenger to attest to the dog’s health, behavior, and training. The second form, the ‘animal relief form,’ requires the passenger to attest that the dog will not relieve itself in flight if it will be on board for eight or more hours.

Whether and how the DOT forms protect the system from the kind of abuse and misuse that created so many problems with emotional support animals remains to be seen. It’s worth noting that the only required signatures on the DOT’s forms are from the passenger.  In this way, ironically, the DOT forms are significantly less cumbersome than the ESA forms, which required one form to be filled out and signed by the dog’s veterinarian, another by a physician (the result was effectively a cottage industry of “ESA” websites offering “ESA medical packages” including letters from internet therapists), and another by the passenger attesting to the dog’s training and behavioral history.

The airline industry is apparently banking on the legal exposure risks as a deterrent to passengers who may have misrepresented themselves and/or their animals in the old era (the DOT service animal forms are, of course, federal forms, and knowingly making false statements on the forms is a crime).

Delta was the first carrier to ban, others soon followed

In July 2018, acting on what Delta’s leadership said they believed was in the best safety interest of passengers and crew,  the air carrier took the unprecedented step of declaring that it was “no longer accepting pit bull type dogs as service or support animals.”

Delta’s pit bull ban triggered what seemed to be an instinctively negative, knee-jerk response from the public, including outcry on social media, especially from animal rights activists. The Atlanta-based carrier’s 2018 decision followed what was, according to spokesperson Lisa Hanna, a “sharp increase” — in past statements, the airline said that this was an 84% jump — in bite incidents or attacks aboard Delta flights involving pit bulls in 2016 and 2017.

United Airlines has not yet commented or announced changes to its policies.