Seresto Under Siege on Capitol Hill as ‘Investigative Reporter’ and Dems Team Up, Renewing Calls to Recall ‘Killer’ Collars

The blockbuster Seresto flea-and-tick collar was skewered by lawmakers yesterday, who renewed their calls for parent company Elanco Animal Health, Inc. to pull the collars from shelves during a hearing held by the House Committee on Oversight & Reform, Subcommittee on Economic & Consumer Policy.

The hearing, whose title was “Seresto Flea and Tick Collars: Examining Why a Product Linked to More than 2,500 Pet Deaths Remains on the Market,” was livestreamed Wednesday afternoon,  and included testimony from two owners of deceased pets (who did not make themselves available to The Canine Review for questions).

The overall result was a kangaroo court. A product that veterinarians continue to swear by was eviscerated by the subcommittee’s Democratic majority, armed with the same stories by a single ‘investigative’ journalist which TCR has found uncorroborated, and no doubt, cheered on by plaintiffs’ lawyers who have used those reports to bring multiple pending suits against Elanco, Seresto’s manufacturer.

According to Elanco spokeswoman Colleen Dekker, Republicans on the subcommittee were provided with a list by Elanco of suggested witnesses that included veterinarians and scientists. However, none of their suggested witnesses were invited. Instead, according to Dekker, the minority side opted to criticize the majority for taking the time to focus on dog collars instead of baby formula. “We gave them all the names [of vet toxicologists],” Dekker told TCR. “The person they chose was Sheffield,” Dekker said, referring to Carrie Sheffield, listed as the minority’s witness and a Senior Policy Analyst for the Independent Women’s Voice. “They wanted to talk about meaningful consumer issues. Inflation. Gas prices. Baby formula.” Asked to respond to Elanco’s account, spokeswoman for the House Oversight Committee Republicans Jessica Collins said in a statement:

“Democrats decided to hold their first Economic and Consumer Policy Subcommittee hearing of the year on flea and tick collars. Democrats could have called any witnesses they wanted for this hearing but decided to have a one-sided hearing. Flea and tick management is an essential part of pet care, but it is not essential Congressional oversight. Republicans believe the subcommittee’s time and resources should focus on historic inflation, record breaking gas prices, and the infant formula shortage affecting American families. The Republican witness focused on these critical issues impacting Americans today.”

Asked about yesterday’s hearing and whether, in retrospect, he felt he should have appeared in person to testify rather than remotely, Elanco CEO Jeffrey Simmons declined to discuss his testimony or answer specific questions. But someone representing a group of Simmons’s most supportive stakeholders, veterinarians, had this view: “Think what my life is going to be….  I prescribe these daily,” one veterinarian who asked not to be named told The Canine Review following yesterday’s hearing.

On the morning of Tuesday, March 22021, editors at America’s largest newspaper chain, Gannett, published a report that alleged that the popular Seresto flea and tick collars were killing hundreds of dogs and cats.

The story went viral within hours. The allegation: that Seresto collars, a product that’s been on the market since 2012 and has been purchased now more than 34  million times in the United States, had fatally poisoned hundreds of cats and dogs. It was high-impact journalism, for sure. But the quality of the report appeared to us  not to have been worthy of that impact.

TCR established [link here] in the early hours following the story’s publication and repeatedly thereafter that the article — which was co-produced by USA Today (owned by Gannett) and a little-known “investigative” journalism entity called The Midwest Center for Investigative Reporting, was flawed, incomplete, and misleading. The reporters seem to have been so eager to get the “goods” on a large corporation that they ignored — or never tried to understand — fundamental facts about veterinary toxicology that undercut the core of the story.

“The hearing will examine the EPA’s failure to regulate the Seresto collar as well as Elanco’s refusal to take action to protect pets and their owners from the collar’s harm,” The subcommittee, chaired by Rep. Raja Krishnamoorthi, Democrat of Illinois,  said on its website.

Reached for comment by text message, Thomas Maiorino, one of two individuals listed as ‘owners of deceased pets’ who testified in person at yesterday’s hearing, declined to provide the name of a treating veterinarian to corroborate is account. “Sorry we can’t. We didn’t learn about the collar Link until well after My pet perished.. please contact counsel,” he replied. Asked if he would grant permission for the treating veterinarian to offer his or her opinion, Mr. Maiorino did not respond.

Faye Hemsley, the other owner who testified at the hearing, is one of several plaintiffs who has joined in Multi District Litigation. Her counsel, Michael Reese, did not respond to text messages seeking comment, including whether any veterinarian had corroborated her account.

In the plaintiffs’ lawyers’ unusually succinct 23-page original complaint, they allege that Elanco is making false claims in its marketing and advertising by suggesting that Seresto collars are safe. The evidence offered: The vigorously debunked USA Today article, oversized color photographs of the two plaintiffs with their pets, and two plaintiffs’ accounts. As with this week’s hearing, missing from the complaint were  veterinary voices, medical records, or anything else that could prove the case or even make it plausible.

In a discussion about the complaint he filed with three other attorneys, including Michael Reese, the listed counsel for Ms. Hemsley, Spencer Sheehan of Great Neck, Long Island acknowledged in March 2021 that the complaint relied solely on the USA Today story.

Responding by telephone to a question at that time about whether he and his colleagues planned to introduce any evidence in addition to the USA Today story, Mr. Sheehan offered:

“You know, the way our system, I guess, legal system is that, you know, and it might seem silly and, you know, glib to say, well, the evidence comes later, you know, I guess lay person says, well, how do you file a lawsuit without evidence? Well, you really, in many instances, evidence, such as what would be relevant here is in the possession of, you know, the opposition. So a lawsuit in this case has to, you know, do enough, show enough allegations that seem, you know, like, I guess the word is used plausible and, you know, that’s something that can be done without, let’s say, you know, what most people would describe as evidence, meaning, you know, the documents…”

Asked, again, at the time, if he or any of his colleagues had spoken with any veterinarians or planned on introducing veterinary records or necropsies as evidence, Mr. Sheehan responded, “That’s not necessarily required at this early stage or, you know, the early stage and the beginning of any litigation.”

Apparently, fifteen months later, the congressional subcommittee was comfortable adhering to the same the same standard of real evidence – that is, none — in staging its hearing.

As for Mr. Sheehan, asked this week if he was now aware of any veterinarian who would corroborate any of the accounts to which he responded he was not, but emphasized that he would not necessarily be aware if such an account existed and referred us to his colleague Michael Reese, who declined to comment.

Personal note: In case you’re wondering, I have no relationship with Elanco apart from being a longtime customer and, frankly, fan of the collars because I have Labs in northern Westchester, the tick capital of the world, and Seresto has been a game changer. I also founded TCR because of the kind of irresponsible, breathless, activist ‘reporting’ that fuels a story like this kind of ‘investigative,’ fact-free reporting on ‘killer collars.’ And it’s discouraging to see a congressional committee — not to mention the PR people and executives who work for Elanco, the committee’s target – enabling, rather than challenging, that kind of irresponsible journalism.

This twelve-week-old Labrador puppy not only wore the ‘killer’ collar for a full week and lived to bark about it, but even chewed on his big sister Nellie’s larger collar. Indeed, as veterinary toxicologists are keen to point out, the collars are so safe, dogs can eat them. 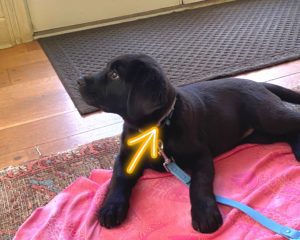