Responding to Conflict of Interest Questions, Journal of Animal Science Publishers Say They Will Add Statement ‘For Clarity’ to Controversial DCM Article. Statement Will Acknowledge Authors’ Ties to Industry.

Although maintaining that “that the absence of a broader COI [Conflict of Interest] statement by the authors does not constitute a COI failure in this case” the publishers of an academic journal article that contradicts the Food and Drug Administration’s reports of cases of canine dilated cardiomyopathy (DCM) and links to certain types of diets wrote to The Canine Review this afternoon that the Journal of Animal Science will add a note to the article acknowledging the authors’ ties to the pet food industry.

The diets which the FDA has linked to DCM are often referred to by veterinarians as ‘BEG,’ an acronym created by renowned veterinary nutritionist Lisa Freeman which stands for B = ’boutique diets,’ E = ‘exotic ingredients,’ and G = ‘grain-free.’

Non-Disclosure Disclosure: Will Not Name Zignature 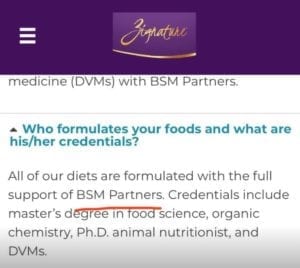 However, the added note will not specify the name of the company (Zignature) with which the authors have a direct financial relationship through their employer, BSM Partners. The Canine Review has confirmed that BSM Partners, the article’s funding source, has a client base that consists primarily of pet food manufacturers. These include Zignature, which the FDA named in its report last year as the second-most often linked to dog food in reported cases of DCM. We have also discovered that Zignature’s website lists BSM Partners – which employs the authors – as part of that food’s formulation team. In short, the authors are funded by a consultancy that is funded by the industry that is the beneficiary of the article written by the authors, which contradicts the findings of the industry’s regulator, the FDA. A direct conflict of interest by any standard.

While denying that those ties constitute a conflict according to the Journal’s standards, Thursday’s statement from the Journal’s publishers said, “We understand that readership could nonetheless have transparency concerns.” The Journal’s addendum added:

Consequently, ASAS will publish a corrigendum in Journal of Animal Science that states, ‘In response to reader inquiries, we are adding the following statement for clarity: BSM Partners provides nutritional advice for pet food companies of all sizes, including both those that produce grain-free, pulse-rich pet foods, and those that produce grain-inclusive, pulse-free pet foods.’”

By omitting Zignature, one could argue that the added note is a non-disclosure disclosure. Rather than spelling out which side of the ‘FDA versus BEG diet’ debate the authors are on, it falsely suggests that the authors dispassionately represent the interests of ‘both those that produce grain-free, pulse-rich pet foods, and those that produce grain-inclusive, pulse-free pet foods.’

Wulster-Radcliffe, who is the chief executive officer of the American Society of Animal Science, which publishes the Journal – emailed the statement following a week of controversy in veterinary circles stirred up by the article and the ties that its authors have to pet food manufacturers that sell ‘BEG’ diets such as Zignature targeted by the FDA reports.

Meanwhile, Oxford University Press has still not responded to TCR’s questions about how it oversees conflicts and disclosure policies in the journals it publishes or whether this was a conflict that should have been disclosed at the outset.