A spokesperson for Elanco, the parent company and maker of the popular Seresto flea and tick collars, told TCR yesterday that the company categorically disputes the substance of a story published on Friday by USA Today alleging that it “failed to report an additional 11,000 safety-related incidents to the federal government since 2020.” In essence, the story alleges that Elanco did not meet statutory reporting obligations and that it engaged in a cover-up immediately following its acquisition of the animal health division of Bayer in 2020. The writer, Jonathan Hettinger asserts:

The owner of Seresto, the popular flea and tick collar already linked to more adverse incidents than any other such product, failed to report an additional 11,000 incidents to the federal government since 2020, newly released records show…Bayer, which originally owned Seresto, had been reporting the incidents to the Environmental Protection Agency until 2020, when it sold its entire Animal Health division to Elanco for $7.6 billion. Under federal pesticide law, companies are required to report incidents of harm to the EPA, which oversees pesticides. The agency had received some 75,000 incidents from Bayer by the time of the sale.

Aside from the fact that emails between the EPA and Bayer show that major corrections are warranted, Hettinger also leaves out yet again the reaction of veterinarians to allegations that the collars are unsafe, even as veterinary toxicologists are obviously the body most equipped to make assessments about toxicity with respect to small animals. Indeed, this is the omission for which he and his editors were most sharply criticized in March.

Hettinger’s new reporting for USA Today is directly contradicted by documents Elanco not only shared with TCR but were also described in detail by the company to the reporter before his story was published. The documents demonstrate that Bayer did “report” the incidents to the EPA–and that Elanco continued to do so following Bayer’s sale of Seresto. The documents confirm that a package of reports was sent back to Bayer with the explanation that during the pandemic there was no one in the EPA’s offices to receive and review them and that Bayer should suspend sending them during the pandemic. Elanco says even after this, electronic submission of these reports continued.

Here are the documents we asked to see that back up Elanco’s account and show that the corrections Elanco is seeking appear to be warranted: 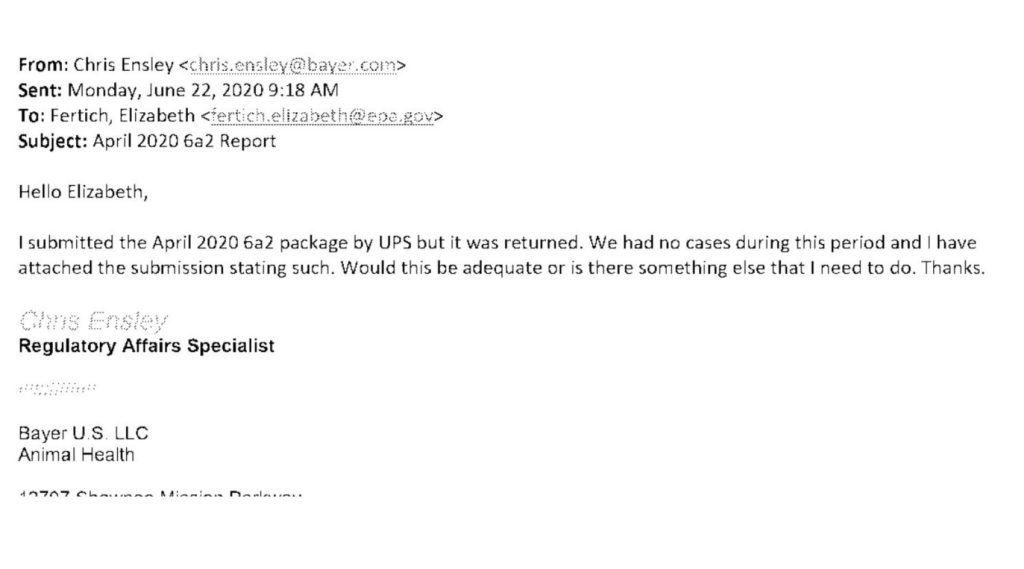 Elanco spokespersons Colleen Dekker and Keri McGrath provided TCR with the full email exchanges between the company and USA Today editors explaining that this was anything but a “failure to report.” Moreover, McGrath and Dekker told TCR that the EPA also told the reporter, Hettinger, that the EPA returned the reports to Bayer and advised the company to stop sending reports because the offices were closed at the time due to the pandemic. The emails between the EPA and Bayer, which TCR has reviewed, substantiate — word for word — Elanco’s account that the EPA returned the reports to Bayer.

An Echo of Prior Unsubstantiated Allegations

A March 2021 article, also published jointly by USA Today and the Midwest Center and written by Hettinger, alleged that Seresto collars were responsible for fatally poisoning at least hundreds of dogs and, at best, that the collars were unsafe. This March article resulted in a critical report by TCR quoting veterinarians and others vouching for the collars. The TCR story began:

On the morning of Tuesday, March 2, editors at America’s largest newspaper chain, Gannett, hit send on an “investigative” report that alleged that the popular Seresto flea and tick collars were killing hundreds of dogs and cats…It was high-impact journalism, for sure. But the quality of the report appears not to have been worthy of that impact…Although the president of the body that certifies veterinarians who wish to specialize in toxicology says, definitively, that USA Today’s story does not ring true, the story went viral online soon after it was published.

Will There Be No Corrrections?

We’ve asked USA Today and the Midwest Center if corrections or a retraction are in the works now that they have been given the documents verifying Elanco’s account that Bayer was asked to stop submitting the reports during the pandemic.  We’ll update you when we get a response from anyone at Gannett, USAT, or Midwest.

Meantime, Elanco has provided TCR with the following statement: (TCR is also seeking the company’s permission to publish its correction demand letter in full, which we have already reviewed in full:

We are in communication with USA Today about the continued inaccuracies and mischaracterizations in Johnathon Hettinger’s reporting about Seresto.  As we have advised USA Today, that reporting contains false statements about our robust pharmacovigilance process.  Contrary to that reporting, not only has Elanco complied with all its reporting obligations, but it has gone above and beyond those requirements by continuing to submit reports even after the agency advised Elanco that hard copy filing was not necessary because of Covid.   Elanco unequivocally continues to stand behind the safety profile of Seresto as a proven solution to help protect dogs and cats from fleas and ticks, which can negatively affect pets’ quality of life and may act as vectors of dangerous disease.