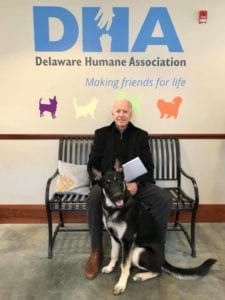 President-elect Joseph R. Biden Jr. is already making good on a campaign promise: “Let’s put dogs back in the White House,” the now president-elect wrote on his Instagram account days before Election Day.

Donald J. Trump’s presidency marked many departures, among them being that Mr. Trump was the first U.S. president in nearly two centuries to live in the White House without a pet. The last known president to do so was James K. Polk, who served from 1845-1849.

President Franklin D. Roosevelt’s Scottish terrier, Fala, traveled the world with FDR, and reportedly slept at FDR’s feet. In his “Fala Speech,” responding to Republican attack ads that he had spent $20 million in tax payer money to send a U.S. Navy destroyer to the Aleutian Islands to retrieve Fala after mistakenly leaving him behind, Mr. Roosevelt said: “Well, of course, I don’t resent attacks, and my family don’t resent attacks, but Fala does resent them.” He added, “You know, Fala’s Scotch and, being a Scottie, as soon as he learned that the Republican fiction writers in Congress and out had concocted a story that I had left him behind on an Aleutian island…his Scotch soul was furious,” FDR said in the speech. “I think I have a right to resent, to object to libelous statements about my dog.”

Fala is buried at FDR’s feet in a rose garden at FDR’s birthplace and lifelong home, Springwood, in Hyde Park, New York.

The Kennedy years in the White House sometimes seemed more like Noah’s Ark: there were hamsters Debbie and Billie; Tom Kitten the cat; Robin, a canary, and two parakeets. There were ponies Macaroni (a gift from Vice President Johnson to Caroline Kennedy) and Tex. There was, of course, Pushinka, the dog (a gift from Nikita Khrushchev); Welsh terrier Charley; German shepherd Clipper; cocker spaniel Shannon; Wolf, an Irish wolfhound. Pushinka and Charley even had a litter of puppies.

President George H.W. Bush and First Lady Barbara Bush were wild about dogs. Mrs. Bush even wrote a memoir about her beloved English Springer Spaniel Millie and her life at 1600 Pennsylvania, Millie’s Book: As dictated to Barbara Bush. Millie delivered a litter of puppies, one of whom was given to George W. Bush: Spot, who would return years later. 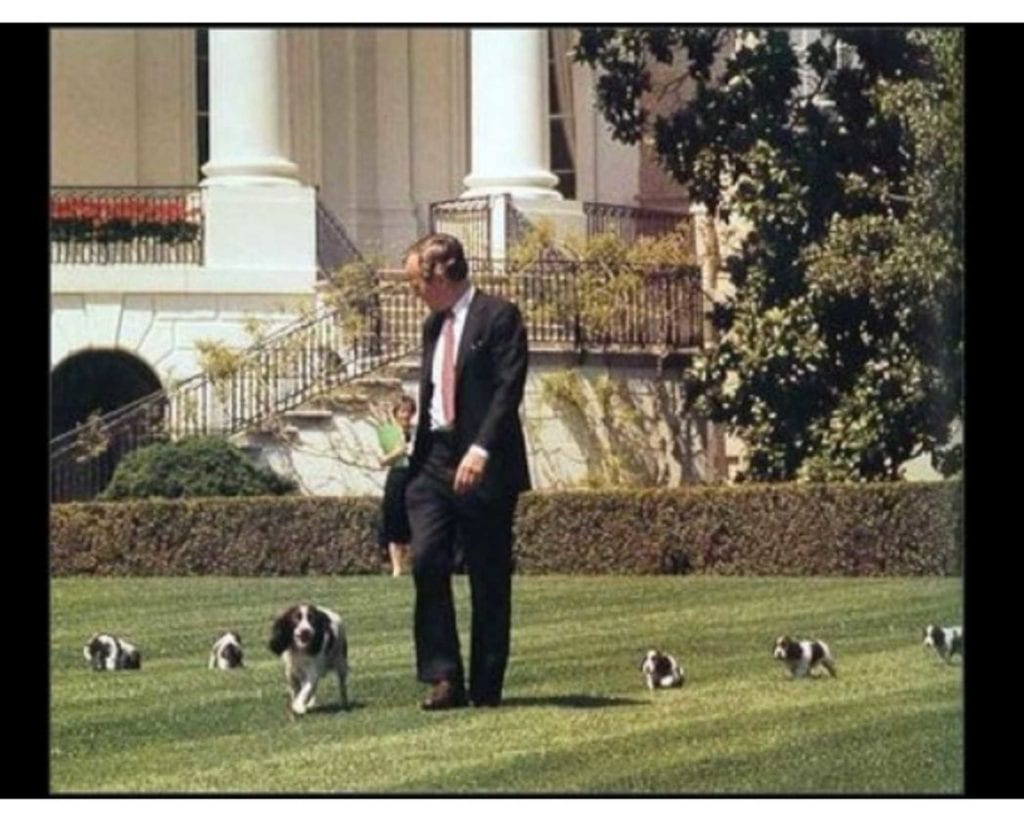 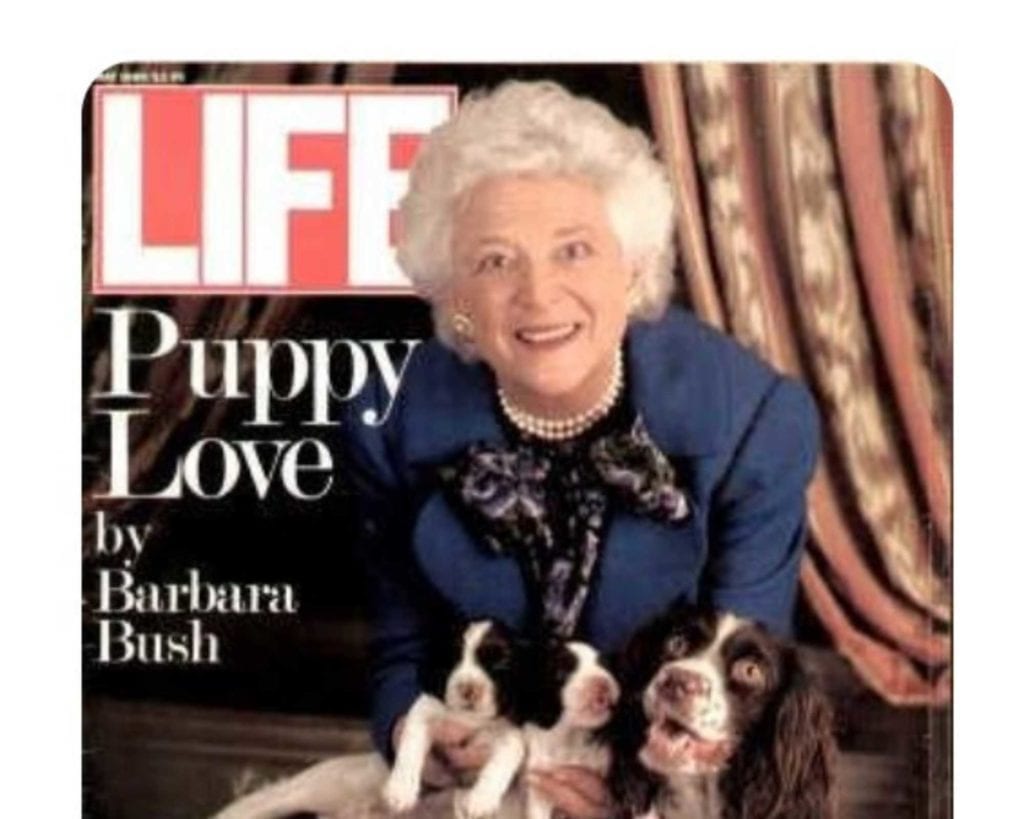 Nobody can forget Buddy, the peppy chocolate Labrador Retriever who entered the Clinton White House near the height of Kenneth W. Starr’s investigation which culminated in the infamous Starr Report. 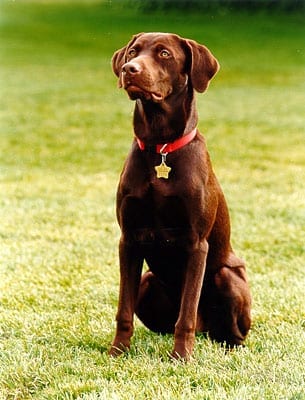 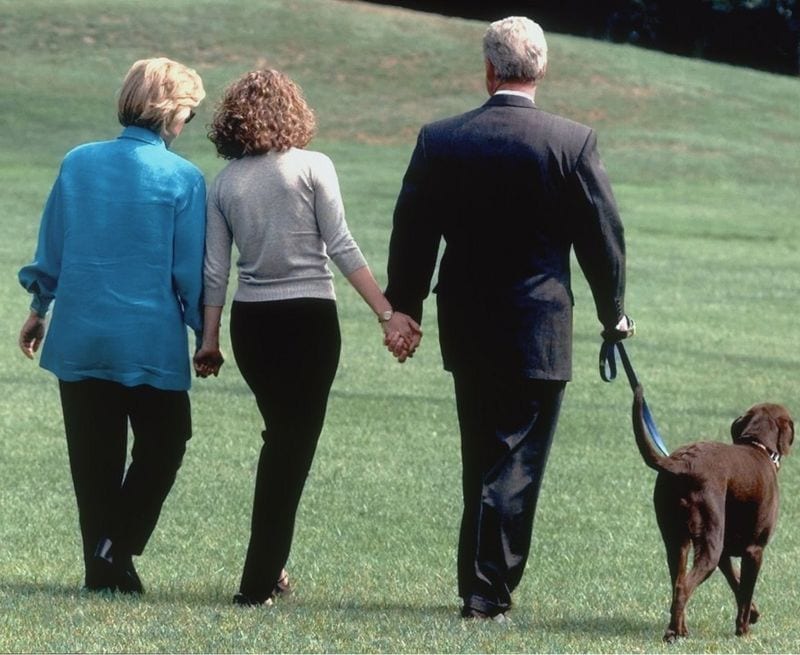 Hours after President Clinton testified about his relationship with Monica Lewinsky to Kenneth W. Starr, the Clintons depart for Martha’s Vineyard.

The history of presidential pets at 1600 Pennsylvania is not all fluff, though. In 2008, George W. Bush’s Scottish terrier, Barney, infamously bit a White House reporter.

In 2013, Sunny Obama knocked over a two-year-old girl at a White House Christmas party. A few years later, in a less publicized incident, photographs surfaced on the internet of Malia Obama with an unidentified friend, whose face was left with a bitten and bloodied by Sunny while visiting the White House. According to the Daily Mail, the friend received stiches from then White House physician Ronny Jackson.

During the Bush years (2001-2009), there was also Miss Beazley (also Scottish terrier), Spot (English Spring spaniel and the only dog in history to live in the White House for two non-consecutive terms, having been born there to Millie, the beloved dog of Barbara and President George H.W. Bush).

Bo Obama, a Portuguese water dog, was a gift from the late Senator Ted Kennedy and the fulfillment of President Barack Obama’s promise to his two daughters, Sasha and Malia, that they could have a dog after he completed his presidential campaign. Before Bo arrived at the White House in mid-April 2009, he was sent to puppy boarding school, according to Politico. 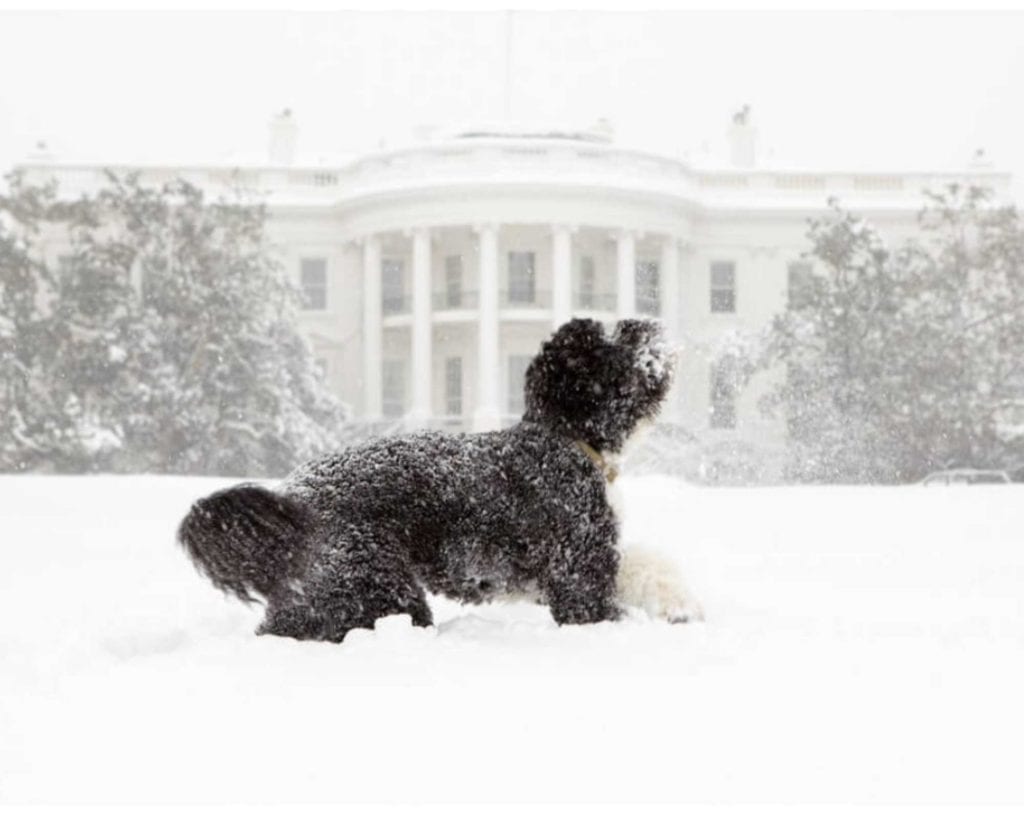 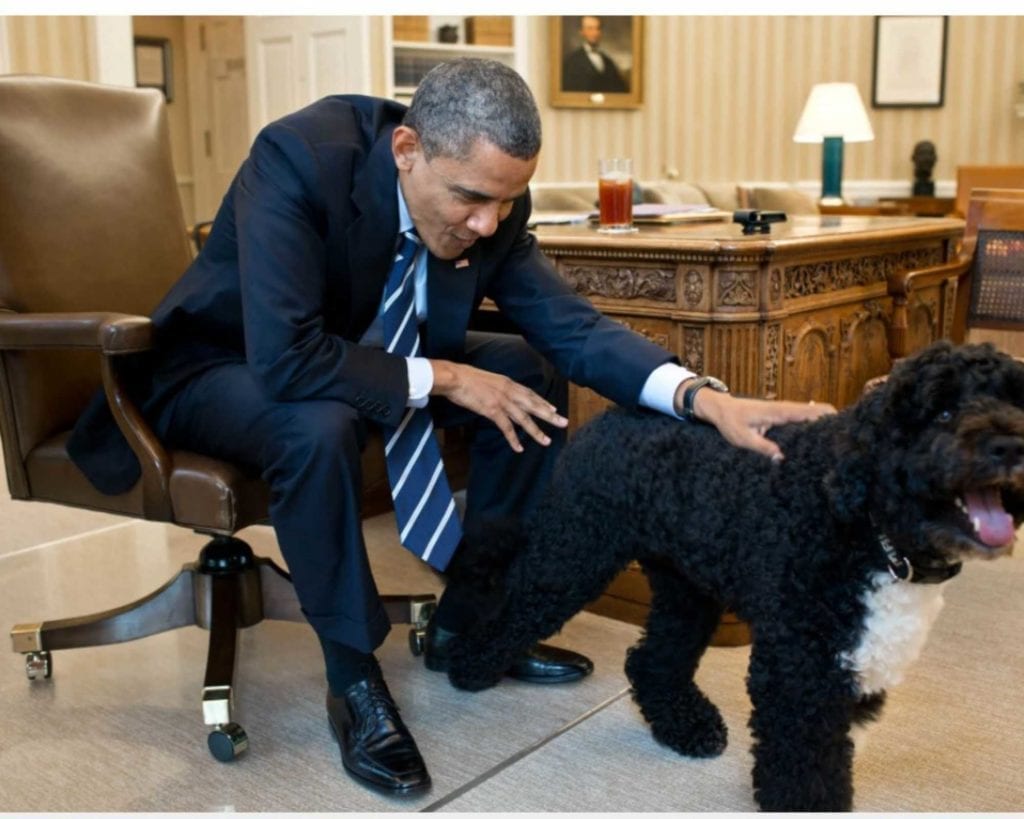 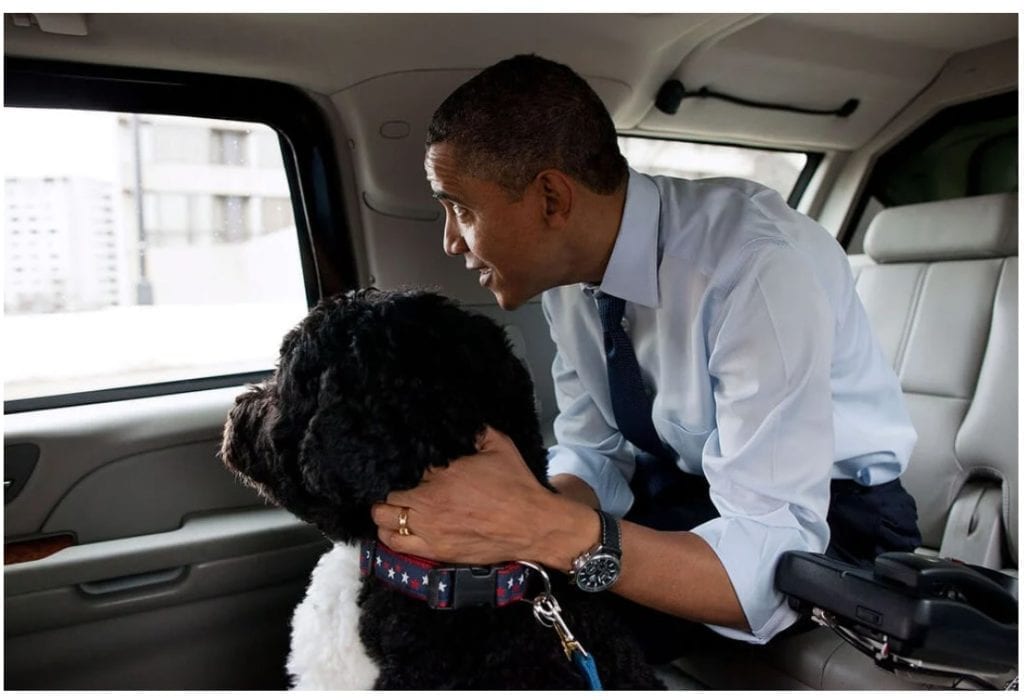 Sunny, the more boisterous of the two, arrived a few years later. 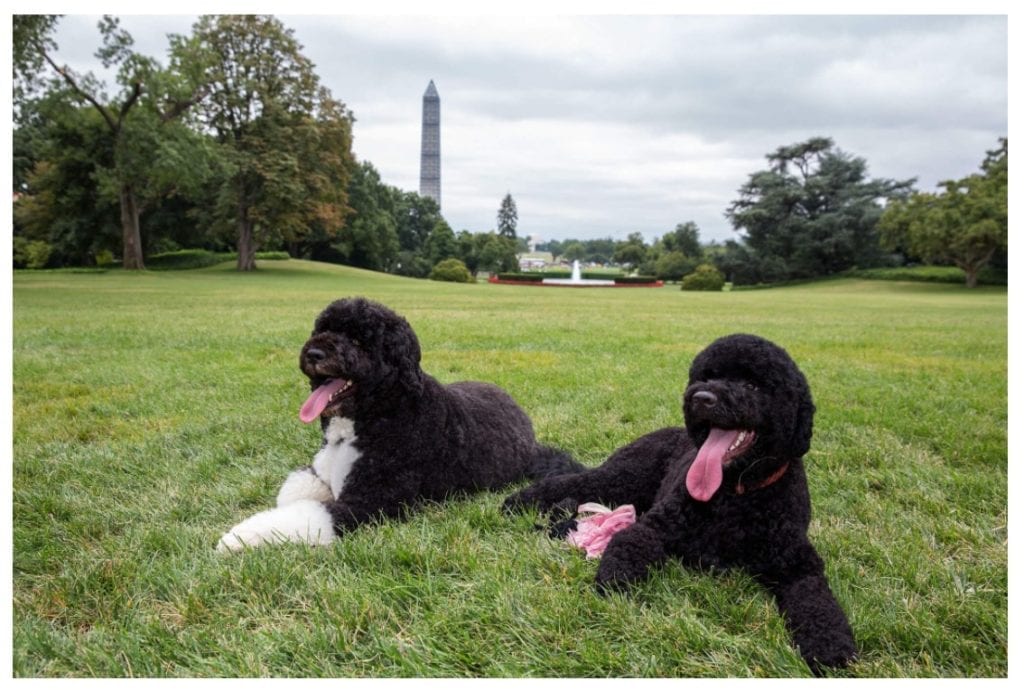 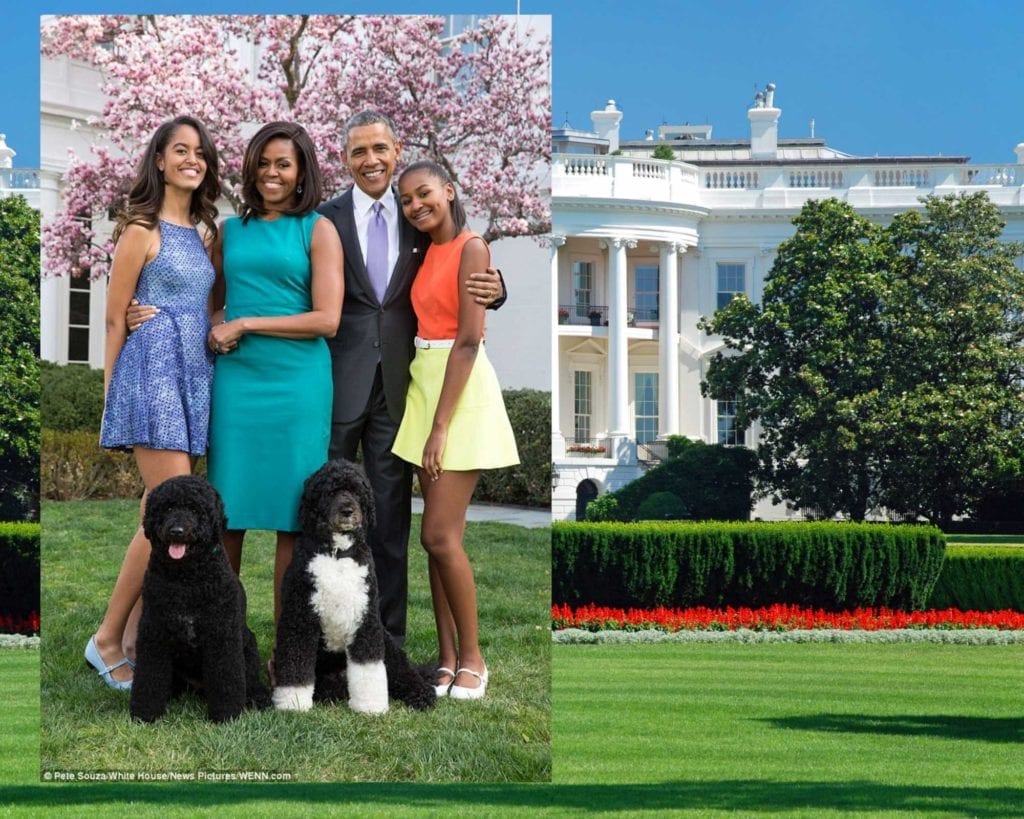 President-elect Joseph R. Biden Jr. was lambasted by animal welfare advocates when, in 2008, the Biden family selected a German shepherd puppy, Champ, from a breeder in Pennsylvania whose license was later revoked because of repeated and egregious violations of the state’s Dog Law. In 2018, the Bidens adopted Major, now 2, from the Delaware Humane Association. 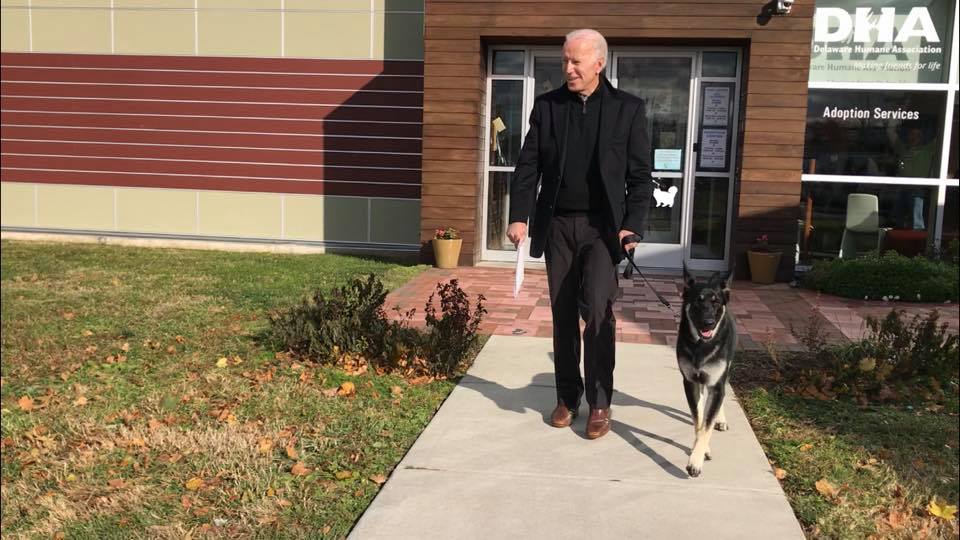 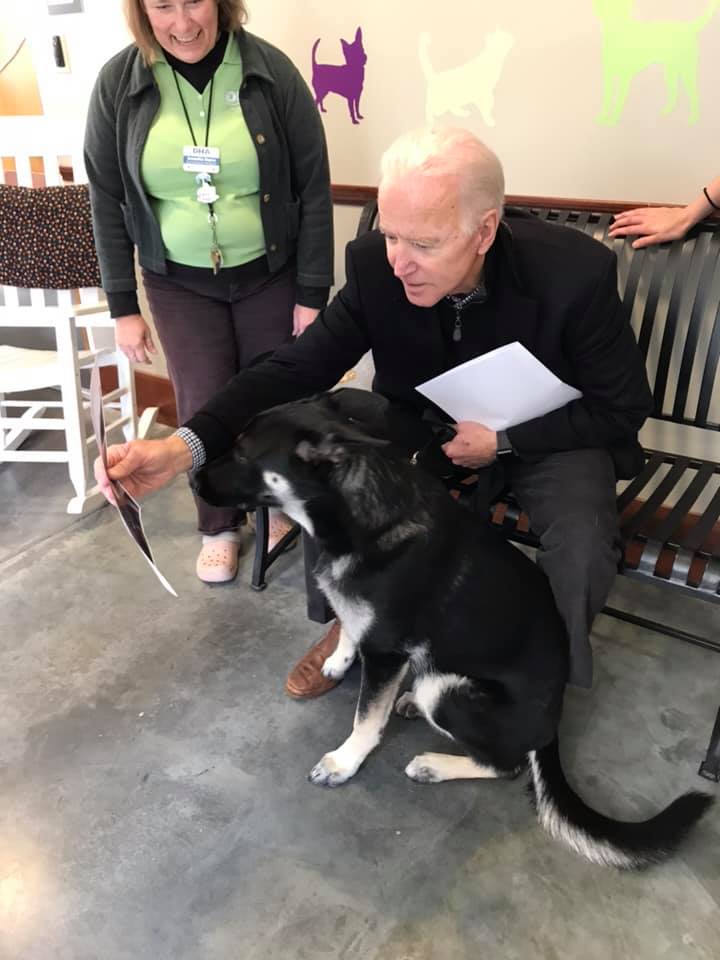 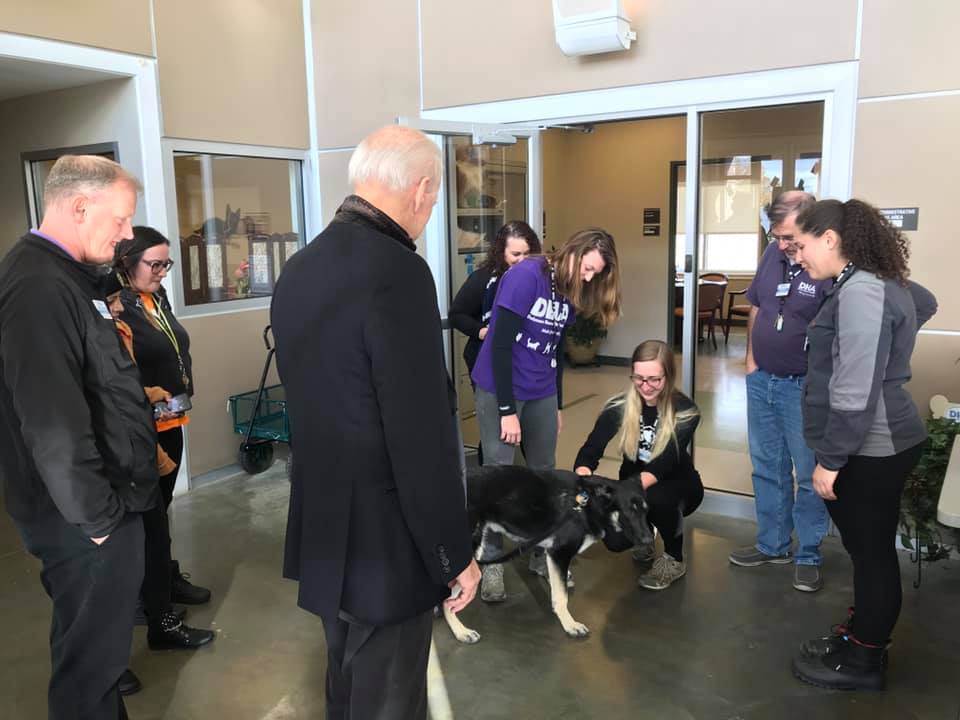 On January 20, 2021, Champ and Major will restore the tradition of pets – naughty and nice – living at 1600 Pennsylvania Avenue.