Behind The Scenes At Westminster, Day 1

On Monday, we met Una, the Coton de Tulear who finished in second place for her breed behind an impressive competitor hailing from South Korea.  (We tried to talk to the first place Coton, but he was mired in a hair maintenance emergency.)

We also met “Pancakes” the black pug, age 2, from San Diego. Her first time at Westminster, her owner, Vicky, says Pancakes entered her first show at just six months of age.  “She’s a super traveler,” Vicky told The Canine Review when asked how Pancakes did on long-haul flights.

We met Josephine, the bleneim Cavalier King Charles Spaniel. Asked about what’s involved in Josephine’s grooming routine pre-showtime, her owner told us she focuses primarily on ears and eyes. “I bathe her in my kitchen sink. She’s really easy.”

We met Chow Chow siblings Quin and Reign, owned by Barbara Decker of Florida who were attracting so many admirers and photographers, a small line had formed.

We met Gigi, the Chinese Crested dog and her owner who showed us Gigi’s personalized, bedazzled brush.

Farther back, we spoke with the owner of Siba, the black standard poodle who won the non-sporting group later that evening at Madison Square Garden. Interview video TK 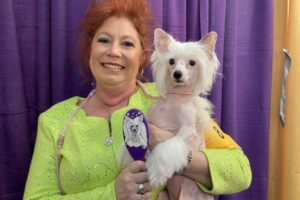 Owner and handler Kathy with "Jiggy" age 4. "This is the Jiggy brush!" Kathy tells us, holding up Jiggy's personalized, hand-painted brush. Asked about how much time it takes to get Jiggy ready for a show, Kathy says, “For her, because she’s got a lot of body hair, 45 minutes, maybe," she says. "I bathe her, then I use a blowdryer," Kathy adds.

That is why we are offering 60-day full access, free trial subscriptions.