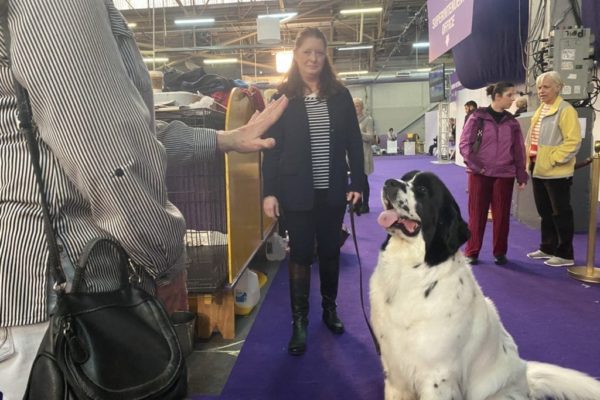 Newfoundland breeder Lynn Anderson-Powell, whose kennel Threeponds is co-owned by her husband William Powell,  has all of the qualities in a breeder that I look for.

I met Lynn on the final day of the Westminster Kennel Club Dog Show, late in the afternoon at Pier 94 as the Best in Breed judging was wrapping up. I was drawn to her dog, “Harry,” a two-year-old black and white Newfoundland known as a “landseer.”

Finding a great breeder is no exact science, but I struck gold with my first field lab, Maggie, when I found Stoneridge (Katie Griffiths) and again with Nellie when I found Duckdawgs (Libby Milroy). I frequently get asked for breeder advice. Lynn is endlessly talkative, confident, and smart. A human encyclopedia about her breed, and not ashamed to brag about everything she’s accomplished, we easily could have conversed for the remainder of the afternoon. She’s approachable, warm, and professional.

“My dad is from Newfoundland…I grew up listening to him tell me how his parents had Newfoundlands…I always wanted one,” she told The Canine Review.

It wasn’t until Anderson was 35 when she got her first “Newf.”

Asked how she got started in breeding Newfs, Anderson said, “I had bred horses, shown horses, had my own farm,” Anderson continued. “Horses are very expensive, I was working full-time and I got to the point where I really couldn’t do both. So I cut back on the horses and at the same time, I had a Newf. And the Newf I got, the guy said, well, we’d really like to have him shown. And eventually we’d like to breed him..So that started the whole thing…I was always into animals and animal husbandry and horses taught me how to evaluate pedigrees and how important what the parents and grandparents were and did. So, it just kind of fell in place.”