Husband-and-wife champion bulldog breeder team Lisa and Chip Gatt have been showing and breeding bulldogs since 2005, and they have the ribbons and trophies which adorn their home to prove it. Their home, with its newly built horse stables and separate kennel building, sits on 10 acres off of a dirt road on the outskirts of Auburn, Indiana, about three hours east of Chicago.

The kennel, which houses the 13 bulldogs that are present at the time of The Canine Review’s visit in September, sits between the barn and main house. It is attached to a run. The inside portions are 4 foot by 6 foot and lined with a thick fleece bedding that Ms. Gatt says is changed each day. The Gatt kennel is also ventilated, heated, and air conditioned.

A spring-loaded door leads to 4-foot-by-15-foot outdoor kennels. The dogs have freedom of movement between indoors and outdoors.  When asked if the dogs lived primarily in the kennels, Ms. Gatt said that all dogs rotate between the kennel and the Gatt’s house.

The Gatts entered the world of private breeders in 2005 after years of owning rescue dogs. Bulldogs were Mr. Gatt’s idea, Ms. Gatt says. “They have so much personality and they just love everybody, typically,” Ms. Gatt says of the breed. “They really don’t want to do anything. It’s not like a lab where you have to find tons of balls to throw or go to a lake. Bulldogs are happy just sitting on the couch, watching TV. … That was a great fit for my husband.”

Ms. Gatt recalls the bulldog competition in Indianapolis which first sparked her interest in showing. It was the experience of being unable to participate in the show because her dog, at the time, did not meet the show’s requirements. “Then we tried to buy a nice show dog, but it’s hard,” she explains. “The dog world is sort of closed. They’ll sell pets to people but show dogs are different.”

Eventually, the Gatts purchased three show dogs from New York and decided to breed the dogs.

Ms. Gatt remained on the show circuit until 2017, after which she began focusing more on horses.

Today, Exact Classic bulldogs can still be seen on the show circuit, but the Gatts have outsourced that work to a professional handler. Ms. Gatt appears to have plans to enter a different show world altogether: “I am fortunate enough to be able to afford some horses now,” she said. “So, about a year and a half ago I decided to go the horse route.”

Along with the handler, the Gatts employ a licensed veterinary technician as their kennel manager. Ms. Gatt may now be focused on riding and horsemanship, but her dogs continue to receive excellent care. The care is, however, sometimes outsourced.

Challenges of the Breed

Ms. Gatt spoke about some of the challenges she has faced as a bulldog breeder, such as puppies diagnosed with spinal bifida almost immediately after being whelped.  Deciding the fate of those puppies is among the hardest aspects of being a breeder, Gatt told The Canine Review. However, she adds that she is guided by doing what she believes is best for the breed.

“I can’t let those dogs go to someone who isn’t going to care for them forever,” she says. “It’s heartbreaking and it’s very difficult. We have wanted to quit a lot.”

All Exact Classic Bulldogs give birth via C-section. The newborn pups are placed in incubators which Ms. Gatt keeps on site. Ms. Gatt explained that in some circumstances, newborn puppies will go to stay with her kennel manager, friends, or relatives of the kennel manager. In all cases the mother Bulldog travels with the pups.

“I don’t always raise the puppies here. I have had people that will raise the puppies for me because with Bulldogs you get up every two hours. For the first three weeks, four weeks of their life. You have no life, like having a newborn,” Ms. Gatt explains.

Exact Classic Bulldogs suffered a particularly devastating year in 2019. Both litters died from what Ms. Gatt describes as a super virus. Ms. Gatt says the pups were taken from the hospital where they were birthed and brought to a friend’s home. She suspects that person gave the pups an incorrect amount of antibiotics before delivering them to the Gatt’s property, were they subsequently died. Ms. Gatt says that person is no longer part of her team.

She says years of breeding have honed her ability to judge a person’s intentions. Per the Exact Classic Bulldog website, the Gatts’ bulldogs sell for between $2,500 and $4,000. The discrepancy comes from the gender of the dog and its show potential. The high price point doubles as the first line of vetting by filtering out many potentially unsuitable applicants.

“I have a whole different level of client than if you were selling $300 chihuahuas,” Ms. Gatt said.

Ms. Gatt prefers to meet with potential buyers in person. There is no formal questionnaire, but there are questions. “My husband used to ask people, ‘Are you an asshole? Because if you’re an asshole I don’t want to sell you a dog.’”

The ideal buyer is someone who genuinely likes dogs, Ms. Gatt says. “I have had [situations] over the years where the husband wanted the dog and the woman didn’t. And then they brought the dog back to me.” 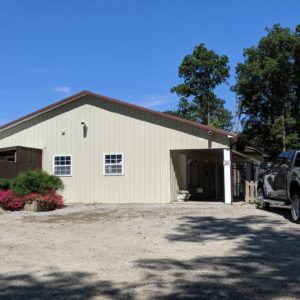 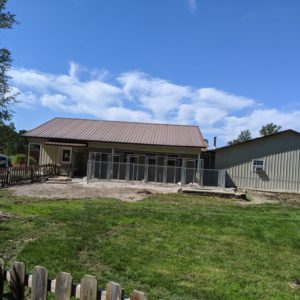 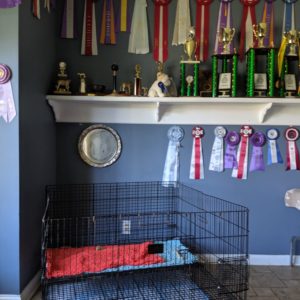 Exact Classic awards room with puppy pen
By The Numbers

Ms. Gatt says the number of litters produced each year varies.
“Bulldogs don’t cycle as regular as some other dogs. They’re supposed to come into heat every six months. I have a girl that comes in once a year,” she explains. “If she comes in at the same time another girl comes in, I’ll have two litters right near each other.”
Additionally, bulldog breeding comes with a particularly short three-year window that starts when dogs are two years old and closes when they turn five.

All buyers must agree to three clauses that are standard in her contracts. The first clause establishes that health insurance has been discussed. Ms. Gatt explains insurance plans offered by Trupanion and AKC Insurance (which is not actually administered by the AKC) but she says she receives no compensation by either entity, and buyers do not need to accept either plan. She says does this in part because health care costs for dogs – and especially bulldogs –are the some of the biggest sources of tension with clients.
“There is no reasonable and customary with veterinarians,” she says. “Where something here might cost me $300, for the customer that takes a dog to Chicago, it’s going to cost them $2,500. So they’re mad at me.”
Ms. Gatt’s contract also stipulates that clients will never turn one of her dogs over to a rescue or shelter, and that the Gatts guarantee they will take the dog back if it is unwanted. Ms. Gatts recalls once sending a friend to New England to retrieve a dog the owner wanted to return.

Finally, Ms. Gatt says she also requires most of her buyers to purchase puppies from her under limited AKC registration papers, which means they cannot be bred.

That is why we are offering 30-day full access, free trial subscriptions.