It’s official. My family is searching for a pandemic pup.

To understand why we need a dog in our lives (sure, the pandemic is part of it because we are spending more time at home these days), you have to understand the love we lost.

I was newly engaged to Jim and living in Chicago when we added Ferris Bueller Cairl to the family. It seemed appropriate to name our dog, a Cheagle (half Chow, half beagle), after the city’s famous fictional teenager. Like his namesake, the pup was disarmingly cute and could get away with anything. We would parade him around the city where nearly everyone would stop to say “hello.” He commanded attention and received it. He was the love of our lives. 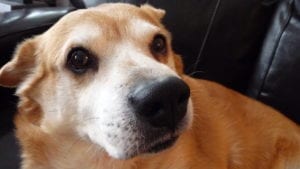 When Ferris was about two, we left Chicago and moved to New York City. We were married and building our careers. We added a few human members to the clan, our daughters Madeline and Ava. Ferris remained our rock through it all. Always ready to cuddle us at a stressful day’s end, he took to both children. He would allow them to brush him for hours, even put bows on his collar, and took turns sleeping next to each of them night after night.

When we moved to the suburbs, Ferris relished playing in the yard and going for long walks in the woods, but he started to slow down.  He had arthritis and a few other medical issues on which we spared no expense. But our vet warned us that he was far past his prime and in chronic pain. When I was pregnant with my son, I watched my dog, then nearly 15 years-old, hang on for the baby’s safe arrival before he let go. Exactly one month after my son, Finn, was born, Ferris, blind and barely able to walk, looked at us and collapsed in my arms.

Losing our dog was heartbreaking for the whole family, especially my husband. I have only seen him cry three times in our marriage: two of the three times were over Ferris.

When I first raised the idea of a new dog a year after Ferris had passed, Jim insisted that we wait until our son was older and better suited to care for a dog. I am quite sure that my husband needed more time to grieve.

It has been seven years, since we lost Ferris. Now, our daughters are older: 17 and 18. They have lives of their own and are planning to leave home soon.  Finn is seven years-old and obsessed with every dog we meet. The pandemic has afforded us more family time and loads more time at home. I proposed to the family that we had waited long enough, and the time had come.

Jim, my husband, continues to express reservations about bringing a new dog into our lives. He continues to remind us of the responsibility, time, and expenses a dog would incur. The girls are on board with adding a new canine companion, but, now in their late teens, they seem less emotionally invested in home life as they ponder their own futures. Our son, Finn, however, expresses strong feelings and emotion about the prospect of a dog. He feels it’s his boyhood right to have a dog because his sisters had Ferris when they were growing up.  “Momma, dogs are good for kids. And I’ve been a good kid. I’ll do all my chores just to have a puppy. PLEASE!! It just has to happen.”

I worry about Finn, and how becoming the only remaining child at home when the girls head off to college might affect him.  I think he needs a comforting force to be there for him during these next few years of transition and beyond.

In subsequent discussions in which we continued to hash out the details of our newest family addition, here are the takeaways from those conversations:

1. Where would we look for our new dog?

We wanted to try the “foster to adopt” route for a dog first. This way we could help a dog in need and, best-case scenario, we could ultimately adopt the dog we foster. Worst case, we would help a dog while it looks for their true forever home. If this didn’t work, we were open to going to a breeder, but since we had no clear preference for a breed, we decided to table this route for now and focus on letting fate choose the right breed for us.

2. Did we know what kind of dog we wanted?

With a smaller house and postage stamp size yard, a small to medium-sized dog would suit us best. From there, we were able to fine-tune our list: My husband wants a hound, boxer or bulldog. I would prefer a beagle, Labrador or corgi. Finn is in love with the labradoodle next door and would like his own. We did not feel that we could take on a dog with a lot of medical issues. Our home may be filled with love, but it was just as filled with chaos. We need an animal that can roll with us. We would love a puppy, but we were also open to an older animal.

3. Who would be responsible for the dog?

All family members would help, but this dog would be primarily my responsibility. I fought for it, so I would be the dog’s primary parent. And I am fine with that. I am already walking dogs with friends every day. Now, I would have a companion of my own.

We know what we want. We are ready to do this. Now, the search begins.